It’s hard to believe that we’ve already reached the end of the second year of the project. It’s been so busy recently that it has almost passed us by but here are a few highlights. 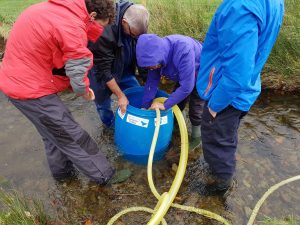 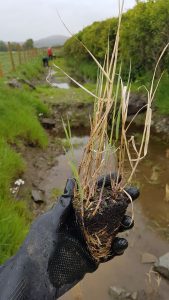 We’ve worked with a local farmer to reduce diffuse pollution by installing a constructed wetland complete with reeds. Buffer strips have been planted up with trees and are now being surveyed regularly by a crack team of volunteers to see how the habitats develop. In total around 300 trees were planted over the winter across several sites.

Working with several landowners and tenant farmers the project has now installed( or have agreed to) over 13kms of fencing, creating nearly 40,000 sq.ms of riparian habitat, that’s the equivalent of 7 football pitches! 480m of covered becks have been de-culverted which is brilliant news for our becks as the original plan was just 50m. The installation of 21 engineered wooden structures (EWS) or large woody debris (LWD) is helping to restore some natural river processes along the River Crake.

Monitoring of work and water quality has continued with volunteers going out monthly with the YSI probe, and phosphate sampling resuming. As appropriate sediment trapping as well as phosphate, nitrate and ammonia dip testing takes place when work is undertaken. Unfortunately the hot dry summer last year prevented any fish monitoring as we were unable to carry out electrofishing. However, a series of training events for volunteers is helping to clean up potential spawning beds through gravel cleaning, who then later go out to look for signs of spawning with Redd Counting. 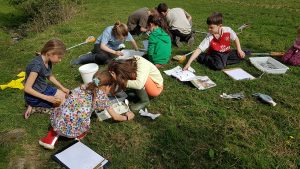 The Eco-group at Penny Bridge Academy have become Riverfly Monitors, having adopted their local beck. The whole school has also become more aware of the importance of having clean becks and rivers, have helped to plant trees along the River Crake and made nest boxes to help birds. Years 5 & 6 were taken on a Sounds Walk with local sound artist Dan Fox, to listen to Torver Beck and its surroundings using a variety of hydrophones and microphones – who knew that you could hear the wind vibrating through trees.

Talking of nest boxes we ran two community workshops where 38 boxes were made, with around 12  going up in woodland close to the river Crake. 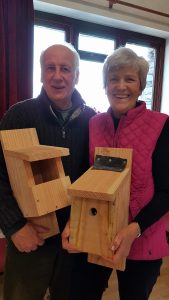 Back in February and working with key members of the community we have started to establish septic tank emptying groups, which will encourage co-ordinated and responsible emptying of private sewage systems.20 household signed up to the scheme ans we’re hoping that more will join in the the coming months. 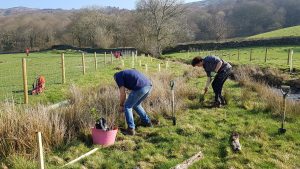 Volunteers have given 223 days of work to the project in this second year from tree planting and survey work to cleaning gravel and litter picking . We’ve given/hosted/attended 22 events, shows, talks and walks engaging with around 700 adults and children, as well as working with 150 students and teachers at three schools.

We’ve already re-wiggled a beck, organised a Family Activity Day which around 80 people attended and the stand at the Coniston Country Fair was busy all day. John Ruskin High School Year 7s enjoyed discovering all about freshwater invertebrates and fish monitoring has got underway with 5 electrofishing surveys on three becks.