Slate Shards and the River Crake

One of the conservation activities of the project concerns slate shards in the River Crake. In the 1700s and 1800s  a variety of materials were transported from Coniston to Greenodd via Coniston Water and the Crake. As well as copper, charcoal and iron, one of the commodities was slate. It was unloaded at the southern end of the lake, before being moved to Greenodd by road. There were several unloading points including a quayside approximately 50m south of Allen Tarn, where most of the transfers were done. Between 1829 and 1836 over 4,000 tons of slate was shipped down the lake and river where unfortunately some slate was either lost overboard or discarded at these points along the Crake.

Surveys have shown that there is a large amount of slate, in the form of shards, settled on the riverbed. Flat and angular, their high resistance to the flowing current means that they have moved little over the years, in effect armouring the riverbed and preventing smaller gravels from accumulating. Spawning grounds are therefore poor. The project has undertaken a series of surveys and have recently carried out a test section of slate shard removal. Project Officer Mike, accompanied by volunteers Jens and Dave, spent a day in the river, surveying and recording a small section and removing approximately two tons of slate shards by hand to see what results. Further discussions will take place in order to assess this activity, balancing up the amount of slate that needs to be removed by the amount of time and volunteers it will take. 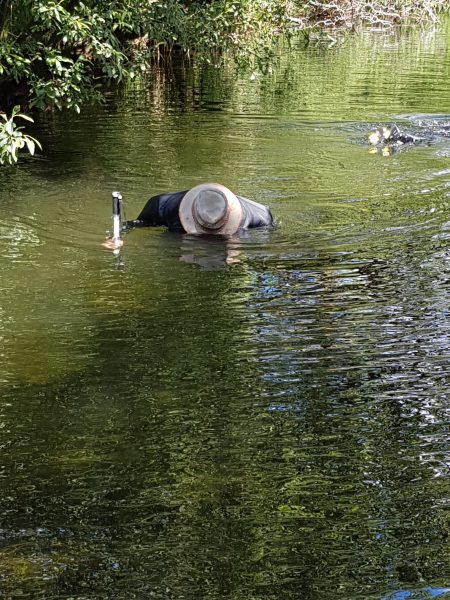